Sochi International Airport (in Russian Международный Аэропорт Сочи) is an airport located in Adler District of the resort city of Sochi, on the coast of the Black Sea in the federal subject of Krasnodar Kraj, Russia. As of 2010, the airport was the eights airport serving 1.9 million passengers a year. Sochi International Airport has two terminals and two artificial runways. Because of the presence of natural obstacles (mountains) to the north and north-east of the airport, takeoff and landing are only possible on the sea side of the facility; this complicates airport operations, as strong winds can cause take-off and landing to become a safety concern. From 2012 the operator of the airport is Basel Aero, which is run by holding of aviation companies Basic Element and Changi International Group and Sberbank of Russia.

The city of Sochi was preparing for the 2014 Winter Olympics with its success representing an immense challenge for the airport operations. The passenger growth was expected to rise heading towards the event and new technology was needed to ensure the future safety of thousands of participants flying to the Caucasus region of Russia as part of the Olympic Games. Sochi International Airport needs improved airport surveillance and thus the ATM officials began researching the proven benefits of a multi-sensor approach to surveillance with an Advanced Surface Movement Guidance and Control System (A-SMGCS) which integrated multilateration and ADS-B surveillance with existing radar data sources.

ERA got the project in 2010 partly thanks to a reference about its system used for Domodedovo Airport in Moscow. In cooperation with the customer, the Russian company JSC LEMZ R&P Corp., ERA installed its Multi-sensor Surveillance System (MSS) for surface airport surveillance and underwent the SAT during the summer season of 2013. As part of the SAT testing ERA technicians also tracked the route of the flight of Russian President Vladimir Putin and his airplane exact position using the newly deployed surveillance system.

ERA was the first company to complete its part of the airport reconstruction in terms of safety improvements as demonstrated on the controlling day of on-going preparations as part of the visit of Director of the State Civil Aviation Authority of Russia and First Deputy Minister of Transport.

Lianozovo Electromechanical Plant Research and Production Corporation (JSC LEMZ R&P Corp.) has manufactured radars and control equipment operating in 50 countries of Europe, Asia, Africa and Latin America for over 60 years. JSC LEMZ R&P Corp. pays great attention to all-inclusive delivery of all the equipment required for ATM customers, to maximum automation for control and servicing processes, as well as to the creation of a comfortable working environment for radar operators.

As part of the SAT testing ERA technicians also tracked the route of the flight of Russian President Vladimir Putin. 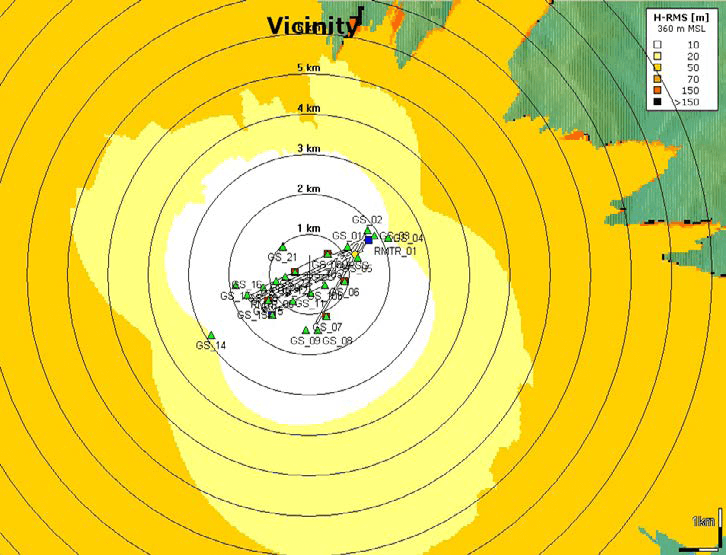 The multilateration performance with accuracy expressed by the coloured contours in meters.