We delivered WAM surveillance solution based on MSS by ERA

The Archipelago of the Azores, belonging to the Portuguese Republic, is composed of volcanic islands situated in the North Atlantic Ocean and is located approximately 1,500 km west of Lisbon. There are nine major Azorean islands: Flores, Corvo, Graciosa, Terceira, São Jorge, Pico, Faial, São Miguel, Santa Maria and the Formigas Reef. They extend for more than 600 km and lie in a northwest-southeast direction. These islands are divided in three groups: Western Group, Central Group and Eastern Group. The Control Centre of the FIR (Flight Information Region) is placed at Santa Maria Island, in the Eastern Group. The importance of Azores Islands as support for the intercontinental flights reached the end with the advent of the jet propulsion and its large autonomy. Nowadays a main part of the En-Route Traffic between Europe and America still overflies the limits East and West of the Santa Maria FIR.

ERA has been chosen by the client NAV Portugal as a reliable supplier of MLAT technology for Azores Western Group extension because ERA has already had one certified operational system deployed over the Central Group of the Azorean Islands. The ERA Multilateration sensors are compact, purely passive, have minimal requirements for power and are designed from the ground up to be essentially maintenance-free. Due to those facts, the resistance to adverse weather conditions and the minimal impact of the stations and antennas on the environment, the sensors can be easily mounted at most locations and hence are perfectly suitable for damp environment of islands placed in the middle of Atlantic Ocean. ERA cooperated closely with Westica Communications Limited, a wireless technology company from Glasgow UK who have designed and planned the microwave link connections for the project.

The ERA product MSS (Multi-sensor Surveillance System) for WAM Azores is based on MLAT distributed time architecture and also decodes ADS-B messages. After the extension of the WAM Central Group system to the Western islands Flores and Corvo, the whole WAM Azores system consists of 17 ground stations and it covers the entire area including the approach routes for a handful of small airports. The concept is based on a highly reliable and fully redundant solution. PC Workstation with Remote Management terminal and several other parts are placed in the ATC tower of Flores Airport. All base station sites are interconnected using Westica’s proven wireless technology which has been used in many “Mission critical” projects around the world.

The Azores WAM System covers not only the TMA of Azores, but it extends also its coverage over a considerable amount of oceanic air space belonging to the Santa Maria FIR. Main user of this System is the Santa Maria Oceanic Control Centre. On completion, the Westica microwave radiosystem will connect seven islands together, with many paths crossing the Atlantic Ocean at distances of up to 76 km.

The ERA Company has successfully passed two rounds of testing - FAT in july and SAT in December 2013 and the WAM system has become operational at the beginning of year 2014.

NAV Portugal is the Portuguese Air Navigation Service Provider (ANSP) with the responsibility over Portuguese continental territory and a vast area of the north Atlantic. It has two control centres (Lisbon and Santa Maria – Azores), 9 control towers in national airports, a training centre and numerous systems and equipment to support air navigation. 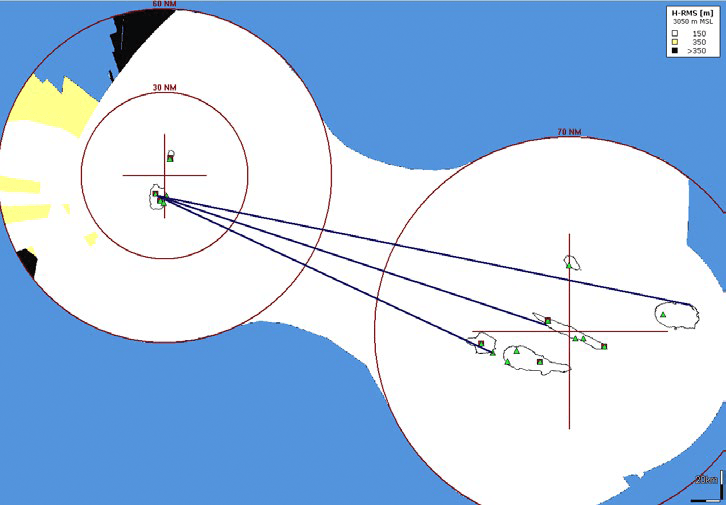 The picture shows the actual coverage and accuracy after the last extension at the flight level 100 (that means sea level 3050 metres).

“NAV Portugal believes that the choice of ERA for implementing the extension of the system will contribute to ensure a robust solution for such a challenging project, considering the difficulties inherent to the location of the sites and the need of integrating this system with the one already installed on the Central Group of Azores, also implemented by ERA”