We delivered WAM by ERA, Windhoek and extensions

The Republic of Namibia stretches over 1,290 km along Africa’s Atlantic coast and reaches over 966 km inland – 825,000 km2 in all the same territory as France and Germany put together. Namibia consists of a number of different landscapes: coastal desert with dry riverbeds and canyons, rugged mountain ranges, sand-filled valleys, heavy rains with tropical forests and woodland savannahs. Summer temperatures can reach 40 °C and frosts are common in the winter.

The airspace over the large territory of Namibia has grown busier over time due to high altitude traffic between Europe and the Republic of South Africa, particularly during the FIFA World Cup – the football championship in 2010. Provision of air traffic control and air safety has become urgent and the lack of radar equipment and shortage of air traffic controllers at Namibian airports has seriously threatened airspace safety over Namibia. Several airports had to be closed. Namibian airspace was managed exclusively by radio communication and aircrafts were separated by ICAO procedural separation standards.

This completely inadequate radar coverage resulted in an urgent need for radars represented by MSS (Multi-sensor Surveillance System) for the entire area of the country. This situation led to the decision to request for a Proposal (RFP) issued by Namibian CAA (Civil Aviation Authorities) for the supply, optimisation and commissioning of a Wide Area Multilateration System (WAM). There was a need to cover a huge area with mountains reaching an elevation over 3,500 m. The population density is one of the world’s lowest, which is combined with the lack of an adequate and modern infrastructure. In addition, no construction work is allowed within the large area of Etosha National Park (ca 100,00 km2).

ERA won the contract as a subcontractor to the French company Thales. The ERA system is part of Thales’ Eurocat-X ATM system as the primary surveillance source. The configuration of the system comprises remote Ground Stations (GS), a redundant Central Processing Server (CPS) and a Management System including a Remote Management Terminal. The stations are configured as receiving sites (RXs) and receiving/transmitting sites (RXTXs). The ground stations consist of 1090 MHz and GNSS receiving antennas, 1030 MHz transmitting antennas and several electronic units which are housed under a shared shielding case. ERA proposed the Distributed Time (DT ) system architecture for the WAM system. The advantages of the chosen approach are as follows:

As the result of implementing the above described MSS technology for the area of Namibia, the Wide Area Multilateration system in this country is the largest system of its kind in the world both in terms of area and number of ground stations deployed across the entire country. The original Namibia WAM system employs 36 widely separated and unmanned ground based stations, after two phases of extension the number of stations have increased to 55. Accuracy is usually less than 200 meters, and in smaller local configurations it can be less than 50 meters. The system was certified according to ICAO as safe and capable of supporting aircraft separations as low as 10 nautical miles across Namibian air space. 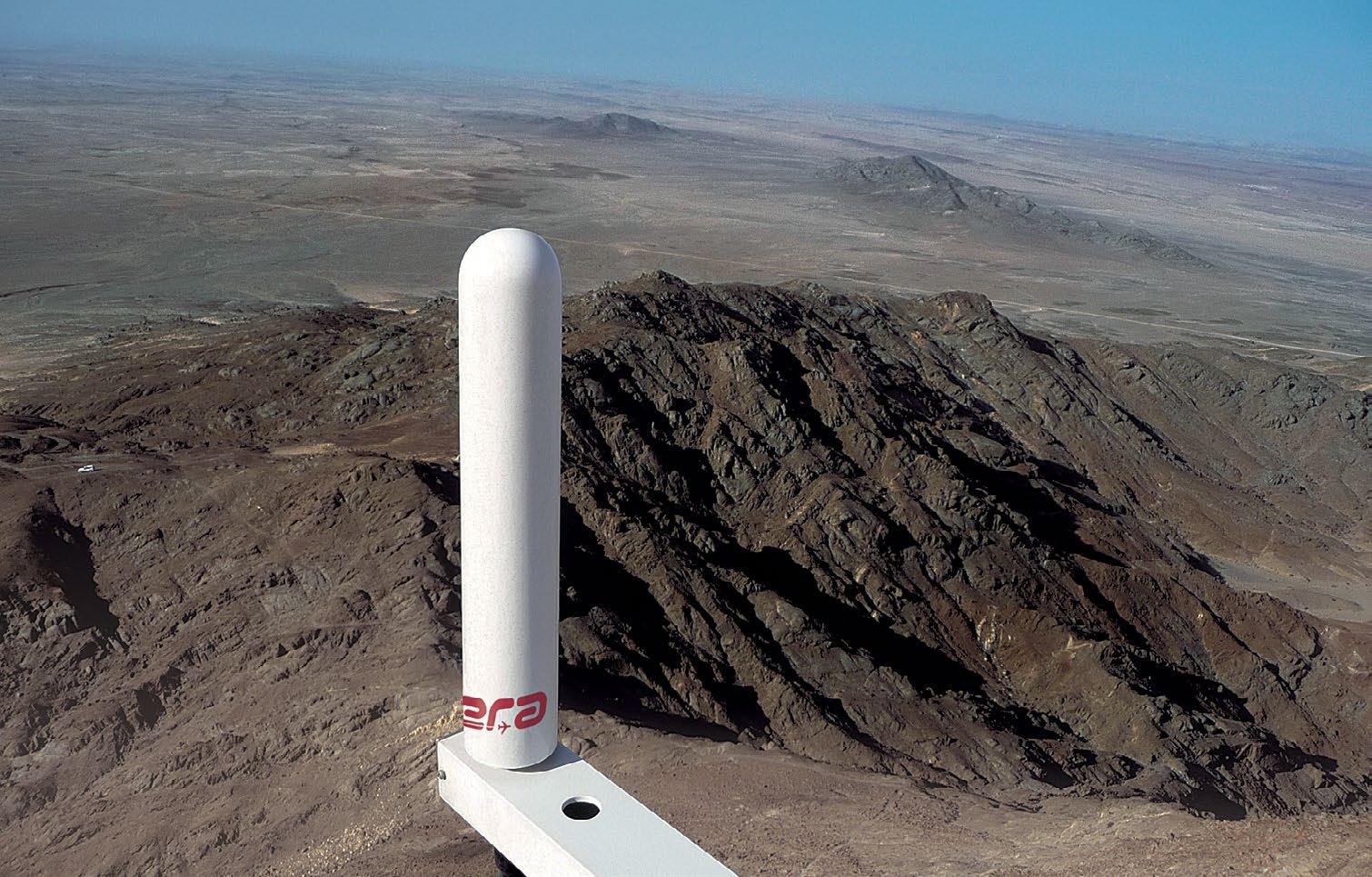 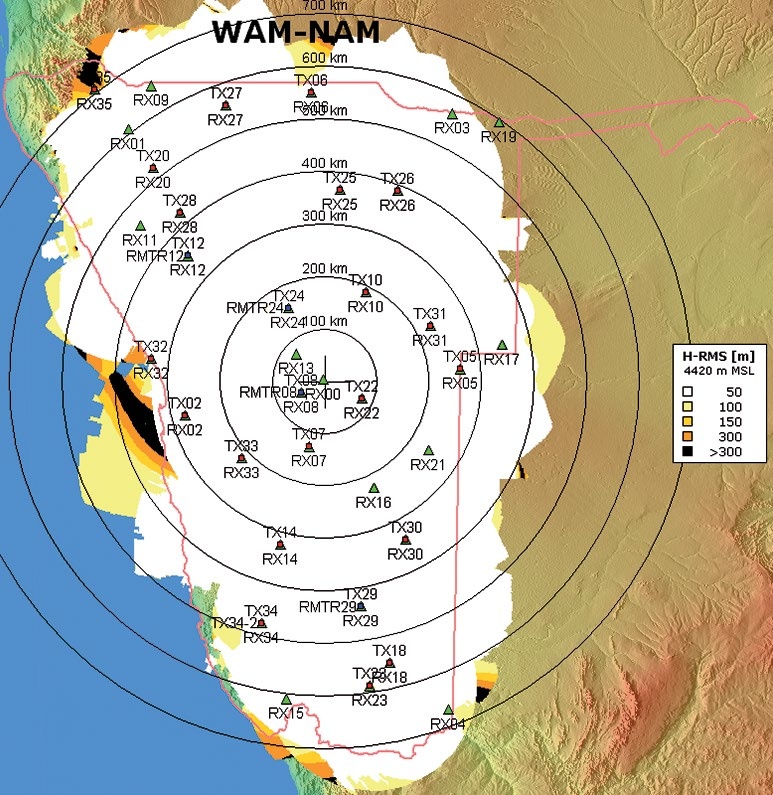 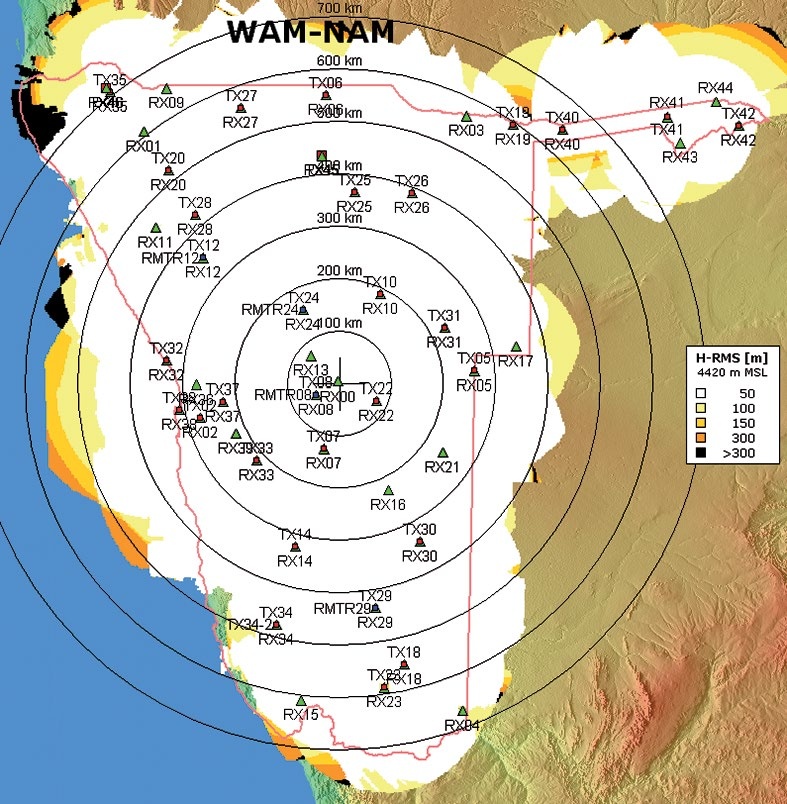 The net of stations and coverage after the 1st extension.

“As a result of the WAM system performance we decided to deploy an extension around Walvis Bay and in Caprivi with additional extensions being contemplated to provide WAM redundancy for Hosea Kutako International Airport at Windhoek, as well as Eros Airport.“

Tobias Günzel
the Deputy Director of Aviation, Administration and Navigation for the Namibian Civil Aviation Directorate

Thales Group is a French company that designs and builds electrical systems and provides services for the aerospace, defence, transportation and security markets. It is partially state-owned by the French state and has operations in more than 50 countries. It has 68,000 employees and is the 11th largest defence contractor in the world.